To celebrate my first year of riding a motorbike, I am heading off on a 3 day road trip. I believe that riding a motorbike is the modern day equivalent of the old wild west with the cowboys riding off into the sunset on their horses. I am really looking forward to it.

Day 1 is going from my home in Palmerston North (all locations in New Zealand) to Napier and then on to Gisborne. I will spend the night in a small town near Gisborne called Matawai.

Day 2 I head off to Tauranga via Opotiki and Whakatane. One of the horses my brother and I have shares in is racing at Tauranga so I will take time out and go and watch him race. Hopefully the pressure of me being there will not affect his performance as I seem to be a bit of a jinx whenever I am actually at a race. His name is "He Sure Is" and he has won his last two races. We would love him to win three in a row. My granddaughter and her mum are also going to be in Tauranga so I hope to be able to catch up with them as well.

Day 3 I have an all day ride back home to Palmerston North.

Weather forecast is for fine weather on day 1 and 2 and rain on day 3.

I will be filing the panniers on my bike, a BMW G650GS, and also packing a small tent, sleeping bag, foam roll up mattress. I will be filming the entire ride using my Go Pro Hero 2.

I will try and blog from my iPad each day and update you on how I get on.
at December 30, 2012 No comments:

When you visit my site during an Internet Defense League campaign, you may see a pop-up asking you to join. This is not a scam, or a trojan, or some nefarious scheme I have thought up to part you from your money or personal information.

The IDL is an organisation whose aim is to ensure that the Internet remains free and open. When open attempts to regulate the Internet failed, like SOPA and PIPA,  governments are now trying to slip internet regulation into less threatening sounding legislation. Go to www.internetdefenseleague.org for more information.

In New Zealand we have the TPP being negotiated. This is ostensibly a free trade agreement, and who doesn't like the idea of free trade. If free trade is so good, why is it being negotiated in secret with none of the agreement clauses being made public. There have been some leaks of whats on the table and they look less like free trade and more like restriction on internet activities. Go here to find out more.

My general rule of thumb is that if governments do something in secret, be afraid, be very afraid.
at December 02, 2012 No comments:

Well I finally outgrew my little Suzuki Intruder 250. I have to say it was a fantastic bike to learn on. Easy to ride and very forgiving. We had many good rides together around the back roads of the Manawatu and a couple of trips to Wellington.

With summer coming, I wanted a new bike that would let me commute to work in Wellington, have my weekend adventures and, most importantly, let me explore the gravel and dirt roads I see on my wanderings.

After much investigation and blog reading, I settled on the BMW G650GS which I picked up last Friday. My plan was to ring back on Monday and book my 1000km service as I was due to do a 400km ride with a group called the Back Road Riders on Sunday. However the wind, the rain, and my wimpy nature meant I didn't do the ride. Next time though.

I rode the bike back from Wellington to Palmerston North on Friday and I loved it. Good power (remember I have stepped up from a 250 cruiser), great handling and a very comfortable seating position. I love it. Rode to work in Wellington this morning with a smile on my face all the way.

The one thing I would criticize is the wind buffeting. The windshield pushes the wind into my neck which gets to be a bit of a pain after a while. I have done a bit of research and I have just ordered a Touratech windshield adjuster. I am going to try and adjust the current stock windshield so it pushes up just a little. This may do enough to send the wind over my head. I had the taller seat fitted so think this is what is causing the problem.

Had a few farkles fitted when I bought the bike and will see what else I need. I had fitted the high seat option, engine protector, Scott Oiler and a set of Givi Trekker 33lt panniers and top box. I am now all set to go! I will post updates as I put my baby through her paces. 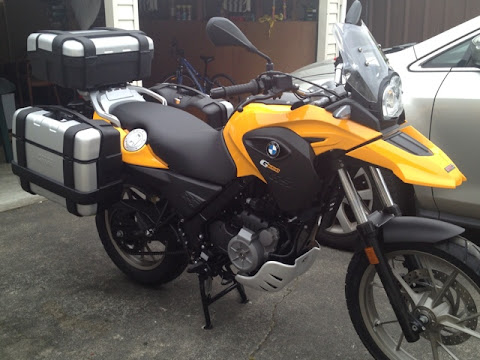 Like a good little Applebot I upgraded my iPad2 and iPhone 4s to IOS6 a couple of weeks after IOS6 was released. 3 days later and my iPad had gone through 10GB of 3G data on a 2GB plan.

It appears as though the "Use 3G Data" setting being turned on meant "always use 3 G data" even when on wi-fi. 64 pages of 3g data use and $800 later I was left with no option but to turn off 3G data to stop running up even bigger bills.

Rang Telecom New Zealand to see if they could help. They put me through to some "special investigation's team". Gotta love honest nerds. The person I spoke to told me that they knew that this was a problem affecting some devices and they had been asked by Apple to monitor affected users if they rang up.

A couple of weeks later I got my bill with nothing done about my $800 of excess data usage. Went into a telecom store to get assistance.They rang the telecom billing department who said they would look into it. On hold for 20 minutes, they came back on and told the telecom person I was dealing with that they were not aware of any data issues with IOS devices. I don't think they realised that they were on speaker phone. The telecom assistant then told them what he could see on the notes, to which they replied "the notes are wrong".

If I was a gambling man, I would say that it looks like Apple are making sure that any hint that there could be a problem is being "disappeared". After all, the usage of data is not telecoms issue, it is an Apple issue. However telecom could have handled this better by at least giving me any info they had instead of stonewalling and denying.

I have no chance of getting anything back from Apple, I will try though, but am not holding out hope. What I will be doing however is hopping off the Apple Fanboy bandwagon. My next phone will be a Nexus 4 and my next tablet, will not be an iPad but a Windows 8 device. I will keep the MacBook Air going as still think its the best non hardcore techie machine on the market.
at November 11, 2012 No comments:

I used to ask myself, "Why on earth would someone ride a motorbike when there are perfectly good cars around?".

I was sitting around on January 4 this year and decided it was time to learn how to ride a motorbike and see what the experience was like. It was summer, beautiful sunny days, so why not.

First step, get a licence. On my birthday last year I went and rode a motorbike and got my proficiency certificate. A quick check showed it was good for 6 months so it was still valid. Next step, learner licence theory test. Down to the AA office and luckily, being a holiday period, they could take me straight away. Eyesight test, check, photo, check, then off to the computer. 10 minutes later and 35/35 I was walking out of there with my learner motorbike licence. In New Zealand there is a graduated licensing system. At my age (50+) I have to spend 6 months on a learner licence and then 6 months on a restricted licence. During this time I am not allowed to ride anything bigger than a 250cc bike.

Next step was to get a motorbike. On my way home from the test I stopped off at the Suzuki dealer and immediately took a liking to a Suzuki Intruder 250LC. 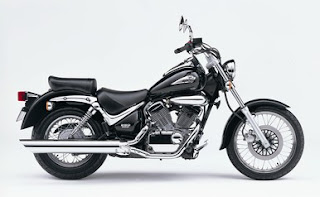 Bought the bike, a helmet, jacket, boots and gloves. They said to come back the next day for the bike, so it was off home to tell my wife. I married a great woman, when I told her, she just laughed and said, "I knew you would".

Next day, I got dropped off at the Suzuki dealer to pick up my bike and go for my first ride. I have to say, that first ride was scary. I had no coordination with the gear changes and struggled to just manoeuvre the bike. I made sure I went for a ride every day for at least an hour. I was only riding around town and getting used to riding in traffic, turning, stopping starting and changing gears. By the end of the first week I was starting to enjoy it. By the end of the first month, I just couldn't wait to get home to go for a ride. Every time I got off the bike after my ride, I felt hyper and alive. Even my kids noticed that I was a happy bouncy guy when I got home.

At the end of the second month I started riding on the open road. I would ride every Saturday and Sunday for an hour or two. Being a 250 and with me weighing in at 110kg, top speed is only 100 kmh before the bike starts to strain (well maybe 110 - 120 with a tail wind and downhill), but that is fine when the open road speed limit is 100 kmh.

By the 3rd month I was very comfortable on the bike and just loved the sensation of riding on the open road with wind rushing by. I ride all around the back roads of Manawatu for 2 hours at a time. I always finish feeling really happy. The endorphins are really racing around my body and the feeling lasts for at least a couple of hours after I finish my ride.

I sit my restricted test next month which will have me on the final stage before I get my full licence. I then have another 3 months before I can get my full licence and then be able to get a real bike. It would normally be 6 months but if I do a defensive riding course, it gets shortened to 3 months. I will definitely be doing the defensive riding course as the little 250 is starting to be annoying. I want a real bike.

I have joined a group of like minded people in a riding group. The group is e-riders and is made up of motorbike enthusiasts in the IT industry in Wellington. My first proper ride will be a ride around the North Island of New Zealand at the end of November, but first I will need to get my full licence (Scheduled for October 4) and get a real motorbike to replace the 250cc Suzuki.

I have been doing research and have found the bike I will be buying on October 5. It is a Triumph Thunderbird Storm from Motorad in Wellington. 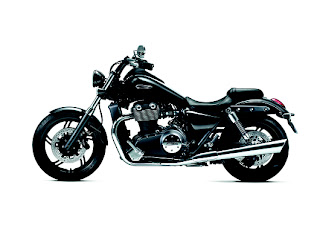 Thats right folks, UFC 99 is going to be a blockbuster. The aging arch villain GM Picelle will take on the good guy Golum in a Pay-Per-View ...